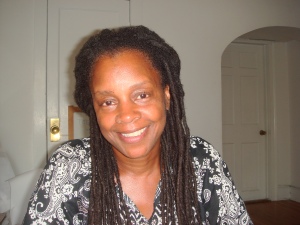 I arrived in Hudson not knowing a single person. I arrived unsteady in my step, looking this way and that, pumped with eagerness to know many people.

First up: the individual introductory stories of fellow students. Seventeen lives focussed on our shared oral history project. During the next nine days, we were told, we would compile 50 hour-long interviews with local residents. These interviews would comprise the beginning of a town archive, likely housed at the Hudson public library.

We were each assigned one, two, or more narrators and asked to arrange our interviews. Everyone went off to do this but I was left bereft and not knowing why. For a moment, that is, not knowing. During our first break, while others were on their phones or tapping email connections, the two leaders quietly took me aside.

“We wanted to have you interview Pam Badila,” said Sara, pointing out that this woman was the unofficial queen of Hudson. “But then three days ago her husband suddenly died.”

“We don’t know whether she’s still up for the interview or not but if she is, would you feel okay about doing it?”

We agreed to leave her alone for a few days then gently request a piece of her time, so freshly grieving. I hadn’t yet learned why she was queen. But I was invited, along with other townsfolk, to march that evening to the river in honour of Pamela’s husband, Congolese-born artist Andre Elombe Badila.

Her only request was that people wear bright colours and bring their loudest musical instruments. And so drums banged, people sang and shouted his name, and the crowd marched noisily down Warren St. to Promenade Park on the Hudson River to watch the sun set, something he and Pamela did each evening.

“We carried him up to the sunset where we would actually stand together,” she told me, a few days later.

To the crowd at the river she said: “…and we will now rejoice. The sun will set on another day, this time in another adventure of a not-ever-to-end story.”

The couple operated a family based international folkloric theatre together and raised their 10 children, and 10 grandchildren, in Hudson. Celebrating ancestral heritage and everyday adventures in life, was how she described their work.

“We, as Africans, do believe that we come from spirit, we occupy mortality for a time, and then we go back to spirit…you do not die, if your name is spoken:  Elombe Badila.”

She and her children spent 12 hours painting the coffin the night before his funeral.

“Painting and talking and laughing and arguing, and it ended up being beautiful. We were painting scenes of endearment.”

Hearts, elephants, trees, and birds, on the outside. Gifts, photos, cranes, bells, reams of coloured cloth on the inside.

“I cut my hair,” she added. “My hair reached my shins. I was going to cut it all off, and give it to him, because he loves my hair and I was gonna let him have it. But my kids said: we gotta look at you!”

“But he got several feet, maybe three feet of it,” she said, tucked  around his face,  shrouded in gold fabric.

By the time we ended our interview, I understood why Pamela Badila was queen.

I'm a creative non-fiction writer, with a special interest in memoirs and obituaries--life stories, local histories with flesh & blood anecdotal details. I'm also beginning to create podcasts of people's stories and expanding their audiences. I'm a diarist, an editor, and a political activist. I live in Toronto, Ontario, Canada and spend days tapping keys or staining my fingers in ink.
View all posts by Nor →
This entry was posted in obituaries and tagged art, death, history, Hudson New York, memorial. Bookmark the permalink.